Find your way in and around Roissy Charles de Gaulle airport. Here is information about airport terminals layout, transport maps, driving directions and connection between terminals. 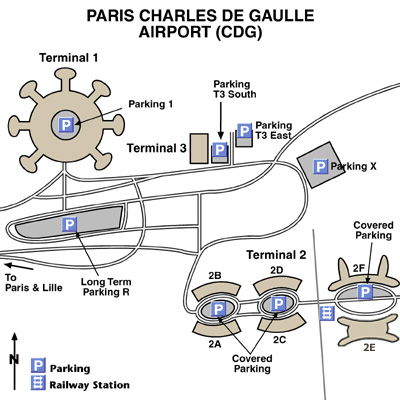 The terminal 1 is hosted in a circular building surrounded by 7 satellites. The building has 7 floors. The 3 upper levels are occuped by a large car park.

Terminal 2 is a very modern building that was initially dedicated to the French national airline Air France. It has gradualy developed to now include 6 modules and even a TGV station (High Speed Train). Its architectural conception was guided by the willingness to reduce walking requirements for passengers inside the terminal between the front door and the boarding gate.

The building has only one level and offers a large public area for check-in and meeting arriving passengers. This terminal 3 is mainly served by low cost airlines. It is located at walking distance from the train station and the connection with the 2 other terminals is operated by free coaches.

From Paris, take the A1 via Porte de la Chapelle. Alternatively, take the A3 via Porte de Bagnolet, join the A1 and follow signposts for the airport. The distance from Paris city center is 25km. The travel time is depending on road traffic conditions and may vary from 20 to 60 minutes...

Transferring between flights ? Connection between terminals is easy and free with the CDGVAL shuttle train. It runs from 4am to 1am. Frequency is one train every 4 minutes. Shuttle bus service is also available and provides transport to and from all areas of Terminal 2 (A to F).

Roissy Charles de Gaulle airport (CDG) is located 25km in the north east of Paris. Bus & coach, shuttle, taxi, train, ... Travellers have plenty of choices to get to and from the airport.

Book your taxi in advance

Book your cab in advance and get a hassle free ride to Paris city center. Flat rate & meet and greet service.